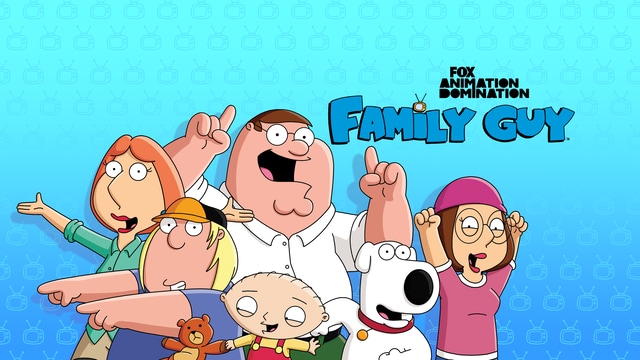 Family Guy is an American animated sitcom created by Seth MacFarlane for the Fox Broadcasting Company that debuted on January 31, 1999. The series is produced by Fuzzy Door Productions and is both produced and syndicated by 20th Television.The series centers on the Griffins, a family consisting of parents Peter and Lois; their children, Meg, Chris, and Stewie; and their anthropomorphic pet dog, Brian. The show is set in the fictional city of Quahog, Rhode Island, and exhibits much of its surreal and dark humor in the form of metafictional cutaway gags that often lampoon American culture. The family was conceived by MacFarlane after developing two animated films, The Life of Larry and Larry & Steve. MacFarlane redesigned the films' protagonist, Larry, and his dog, Steve, and renamed them Peter and Brian, respectively. MacFarlane pitched a seven-minute pilot to Fox in 1998, and the show was greenlit and began production. Family Guy's cancellation was announced shortly after the third season had aired in 2002, with one unaired episode eventually premiering on Adult Swim in 2003, finishing the series' original run. Favorable DVD sales and high ratings from syndicated reruns since then convinced Fox to revive the show in 2004; a fourth season would begin airing the following year on May 1, 2005. Since its premiere, Family Guy has been widely acclaimed. The series has been nominated for 12 Primetime Emmy Awards and 11 Annie Awards, and has won three of each. In 2009, it was nominated for a Primetime Emmy Award for Outstanding Comedy Series, the first time an animated series was nominated for the award since The Flintstones in 1961. In 2013, TV Guide ranked Family Guy the ninth Greatest TV Cartoon of All Time. The series has also attracted criticism and controversy for its offensive content, violence, and writing. Many tie-in media have been released, including Stewie Griffin: The Untold Story, a straight-to-DVD special released in 2005; Family Guy: Live in Vegas, a soundtrack-DVD combo released in 2005, featuring music from the show as well as original music created by MacFarlane and Walter Murphy; a video game and pinball machine, released in 2006 and 2007, respectively; since 2005, six books published by Harper Adult; and Laugh It Up, Fuzzball: The Family Guy Trilogy (2010), a collection of three episodes parodying the original Star Wars trilogy. A spin-off series, The Cleveland Show, featuring Cleveland Brown, aired from September 27, 2009, to May 19, 2013. As of 2020, 355 episodes of Family Guy have been broadcast. On May 11, 2020, Fox renewed the series for a nineteenth season. On September 23, 2020, Fox announced that the show would continue through a twenty-first season. (Wikipedia)