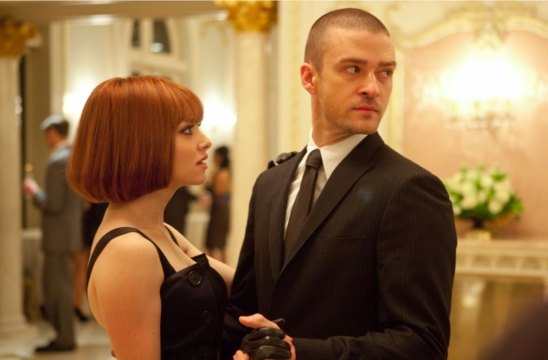 In the future when the aging gene has been switched off, people must pay to stay alive. To avoid overpopulation, time has become the currency that people use to pay for luxuries and necessities from a clock implanted in their forearm. The rich can live forever, while the rest try to negotiate for their immortality. A poor young man is accused of murder when he inherits a fortune of time from a dead upper class man. He is forced to go on the run from a corrupt police force known as 'time keepers'.

Ben Randall is a Coast Guard rescue swimmer. When his crew is killed in an accident and his marriage ends, his commander tells him he wants Randall to go to the US Coast Guard Rescue Swimmer "A" School to train other rescue swimmers. He encounters a guy named Jake who's a little cocky because he was once a swim champion. So Ben puts him through the wringer to see if he can handle it.

When a strange signal pulsates through all cell phone networks worldwide, it starts a murderous epidemic of epic proportions when users become bloodthirsty creatures, and a group of people in New England are among the survivors to deal with the ensuing chaos after.

A group of thieves steal a rare gem, but in the process, two of the men double cross the leader of the thieving group, Patrick, and take off with the precious stone. Ten years later, prominent psychiatrist, Nathan Conrad, is invited to examine a disturbed young woman named, Elisabeth. Patrick immediately kidnaps Nathan's daughter, forcing Nathan to attempt to get Elisabeth to reveal a secret number which will ultimately lead Patrick to the whereabouts of the precious gem that has eluded him.

A rich and successful lawyer, the Counselor, is about to get married to his fiancée but soon becomes entangled in a complex drug plot with a middle-man known as Westray. The plan ends up taking a horrible twist and he must protect himself and his soon to be bride as the truth of the drug business is uncovered and targets are eliminated.

Robert Miller is a successful financial businessman with a loving wife and a smart daughter ready to take over the family business. Professional secrets involving illegal fraudulent activities start coming out at the same time that Robert's personal secrets take a turn for the worse and threaten to derail everything he has achieved.

A woman goes on vacation with her friends after her husband and daughter encounter a tragic accident. One year later she goes hiking with her friends and they get trapped in the cave. With a lack of supply, they struggle to survive and they meet strange blood thirsty creatures.

A dog named Honey who runs group therapy sessions to help neighborhood animals manage the neuroses brought on by their owners and each other.