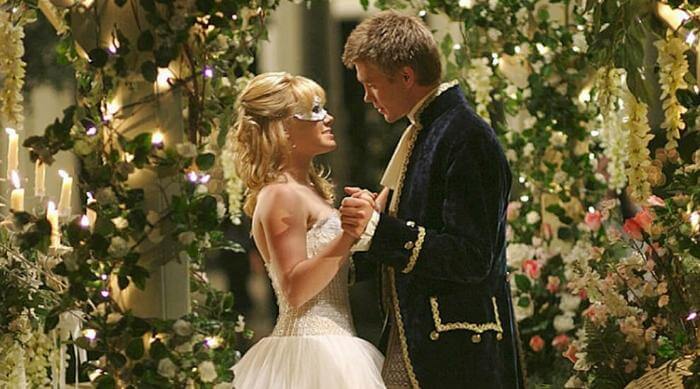 Samantha Montgomery, a teenager in California, is obliged to work as a janitor and dishwasher in the diner of her stepmother, Fiona. After a cell phone mix-up, Sam begins an anonymous text-messaging and e-mail relationship with a boy. They agree to meet at a school dance, but when Samantha finds out that her secret pen pal is none other than Austin Ames, the cutest boy in school, she panics and looks for a way to make herself cooler.

After losing the woman of his dreams, Anderson is convinced he'll never fall in love again. But at the urging of his best friend, he spontaneously proposes to a dissatisfied waitress named Katie and an innocent dare evolves into the kind of love that they both have been looking for all along.

Construction company owner John Matthews learns that his estranged son, Jason, has been arrested for drug trafficking. Facing an unjust prison sentence, John convinces the DEA and the opportunistic DA Joanne Keeghan to let him go undercover to help make arrests big enough to free his son in return. With the unwitting help of an ex-con employee, John enters the narcotics underworld where every move could be his last in an operation that will demand all his resources, wits and courage to survive.

United State's Central Intelligence Agency's Middle East Representative, Roger Ferris, is based in Amman, Jordan, and is keeping a watch on a 'safe house' and believes it to be frequented by young Muslim males. He has information that Al Saleem may be behind terrorist attacks, but lacks any evidence to apprehend him or any of his associates. His plan to implicate Dubai-based Architect, Omar Sadiki, not only fails, his Iranian girlfriend, Aisha, gets abducted, and he must decide whether to surrender himself to her abductors to negotiate her release or leave her to their mercy.

Two emerging nations begin to clash after Paris, the Trojan prince, convinces Helen, Queen of Sparta, to leave her husband, Menelaus, and sail with him back to Troy. After Menelaus finds out that his wife was taken by the Trojans, he asks his brother Agamemnon to help him get her back. Agamemnon sees this as an opportunity for power. So they set off with 1,000 ships holding 50,000 Greeks to Troy. With the help of Achilles, the Greeks are able to fight the never before defeated Trojans.

A successful FBI profiler, Illeana Scott, is summoned to help out Quebec law enforcement in Montreal. Her task is to hunt down a serial killer who assumes the lives and identities of the people he kills as he travels across North America. This forces Illeana to adjust to working in a strange city with a police team with which she doesn't really fit in.

A former professional dancer volunteers to teach dance in the New York public school system. While his background first clashes with his students' tastes, together they create a completely new style of dance. Based on the story of ballroom dancer Pierre Dulane.

KITT, Knight Industries Three Thousand, is an artificially intelligent car that can hack any system, shoot weapons like a jet fighter, and use nanotechnology to transform into other vehicles. This is a sequel to the 1982 TV series of the same name.