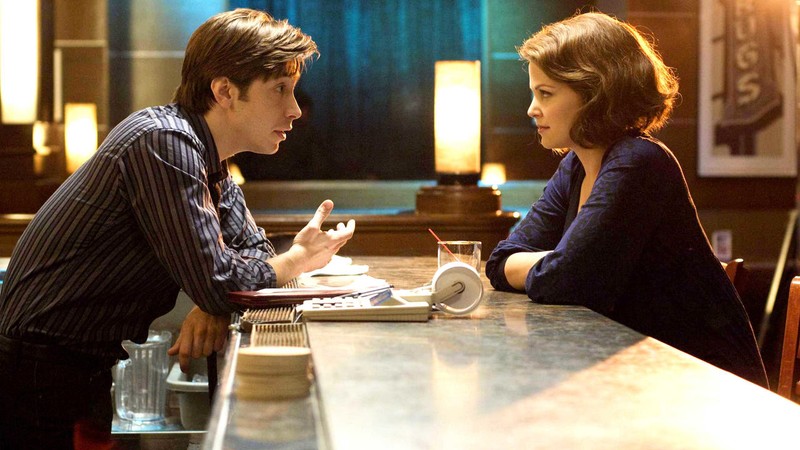 He's Just Not That Into You

In Baltimore, five women and four men try to sort out the signals that the sexes exchange. Gigi imagines every man she meets is Mr. Right; she gets reality checks from Alex, a sweet but cynical saloon keeper. Janine and Ben seem solidly married until he chats with Anna in a market checkout line; meanwhile Anna is indifferent to the pursing Conor. Neil and Beth have been together seven years; she dumps him when she realizes he really and truly isn't going to marry her. And Mary sells advertising while searching online for a man. Will those in love stay in love? Will those searching figure out who is and who isn't into them?

Sarah Nolan, a recently divorced thirty-something-year-old, has a family that just can't help getting involved in her personal life, or lack there of. After her sister puts her profile on PerfectMatch.com, this preschool teacher goes on a number of outrageous and hilarious dates. But will she be able to find the one, who must love dogs?

When Robert Langdon wakes up in an Italian hospital with amnesia, he teams up with Dr. Sienna Brooks and they race across Europe together against the clock to foil a deadly global plot.

In the midst of an elaborate conspiracy, an expert negotiator is driven to the edge when he's framed for the murder of his partner, as well as embezzling money from his department's pension fund. His only chance to prove his innocence is to take hostages himself, acquire the services of another expert negotiator, and find out who's running the conspiracy before it's too late.

In Spokane, an elite government killer goes rogue on the day that engineer Allen Campbell loses a promotion and finds his best man with his wife. Allen goes drinking that night and chats up a stranger who turns out to be Jonas, the hit man. Jonas asks Allen to give him a list of five people he'd like to see dead, so a drunk Allen lists his boss, the guy who got the promotion, a nasty bookie, the best man, and his wife. By the next morning, the boss is dead, and Allen realizes Jonas is for real. Can he stop Jonas?

When his fiancee is kidnapped by human traffickers, Roman and his ex-military brothers set out to track her down and save her before it is too late. Along the way, Roman teams up with Avery, a cop investigating human trafficking and fighting the corrupted bureaucracy that has harmful intentions.

Dr. Max Goodwin is a medical director at one of the United States' oldest public hospitals, aiming to reform the neglected facility by tearing up its bureaucracy to provide exceptional care to patients.