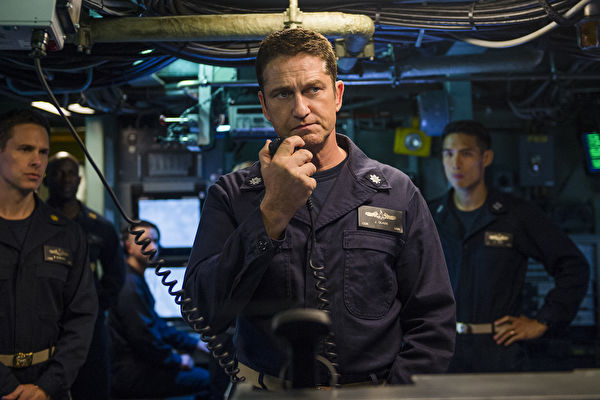 A U.S. submarine, the USS Tampa Bay, vanishes while shadowing a Russian Akula-class submarine in the Arctic. Rear Admiral John Fisk sends a Virginia-class submarine, the USS Arkansas, under the command of newly-promoted and unorthodox Commander Joe Glass to investigate. At the same time, a Navy SEAL team under the command of Lieutenant Bill Beaman is sent in to discreetly observe a Russian naval base. When they arrive at the naval base, they witness defense minister Dmitri Durov conducting a coup d'etat and taking Russian President Zakarin prisoner, and swiftly realize that Durov intends to trigger a war.

Mob boss John Gotti reflects on his three-decade reign of crime in New York City. In 1972, as a young associate, he is tasked by Aniello "Neil" Dellacroce, underboss to the Gambino family, to kill gangster James McBratney, who is believed to be responsible for the kidnapping and murder of boss Carlo Gambino’s nephew. Killing McBratney at a bar, Gotti becomes a “made man”.

In the menacing shadow of 79 A.D. Pompeii's Mount Vesuvius, the orphaned and left-for-dead boy-turned-gladiator, Milo, must fight for his life in the bustling port city's blood-stained arena. Before long, the untamed former slave catches the eye of the city governor Severus' beautiful daughter, Cassia, and much to his surprise, an ardent but perilous romantic affair beyond social classes begins. Now, against the backdrop of an imminent catastrophic volcanic eruption, and the corrupt Roman Senator Corvus' unappeased wrath, the young couple must seek a way out, as rivers of sluggish hot lava and a rain of heavy black ash threaten to devour the small town. Can Milo put aside his wild desire for retribution for Cassias' sake?

Connie Sumner has a loving husband, a beautiful home, and a wonderful son, but she wants more. When she's approached one day by a handsome stranger while trying to hail a taxi, she becomes obsessed with him and eventually starts an affair. But her selfish actions soon catch up with her...

When estranged twins Maggie and Milo feel that they're at the end of their ropes, an unexpected reunion forces them to confront why their lives went so wrong. As the twins reconnect, they realize the key to fixing their lives may just lie in repairing their relationship.

Set in a faceless, concrete high-rise apartment complex on the outskirts of bustling Vienna, the stories of three diverse couples at crossroads interweave during three pivotal days. And, in the unending search for love, intimacy, and a fragment of pure ecstasy, three women become more baffled and vulnerable than ever. With this in mind, even though Alex, a real-estate agent, and Nicole are divorced, Alex finds himself unable to let go of the past. Likewise, Sonja, a supermarket checkout girl, is becoming increasingly jealous of her husband, Marco, and lastly, Eva, a doting mother and nurse, decides to seek excitement in all the wrong places, turning her life upside down.

Exploring the secret life of the America's greatest president, Abraham Lincoln, and the untold story that shaped the nation. The president discovers blood-thirsty vampires are planning to take over the United States. Lincoln makes it his mission to eliminate them, becoming history's greatest hunter of the undead.

A biographical look at The Temptations, the Motown soul vocal quintet who first came to fame in the 1960s, as seen from the viewpoint of the last surviving original member, Otis Williams. Beginning from their humble origins in the late 1950s and continuing through the 1990s and the deaths of the other original members.