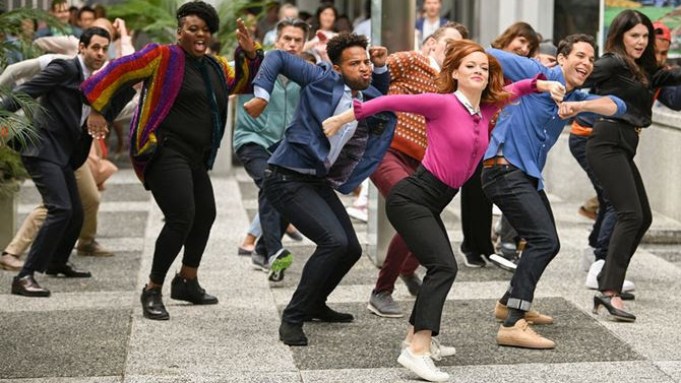 Violet Sanford goes to NYC to pursue a dream of becoming a songwriter. Violet gets a day job as a bar maid at a nightclub called Coyote Ugly. Coyote Ugly is the city's newest hot spot where the employees are a team of sexy, resourceful women that provoke the clientele and press with their mischief.

Son of the Mask

Aspiring cartoonist Tim Avery is feeling inadequate about being a father when he finds that his newborn son has some amazing abilities - the baby has the powers of the Mask of Loki, a mythological object that transforms its user into a manic shape-shifter alter-ego. As bad as a baby with godlike powers might seem, the 'really' bad news is that Loki wants his mask back.

Sixteen-year-old Zoey Stevens, a skilled dancer and straight-A student, is having a hard time adjusting to a new high school, a new and klutzy dance squad, a new step-dad, three new rowdy step-brothers and an unruly dog, but things change when a dog training app on her smart phone begins to somehow control all the boys around her.

When Margo Roth Spiegalmen moved into Jefferson park Quinten Jacobson was in love. They grew up as friends but their friendship drifted apart. Years later she crawls back into his window in the middle of the night to get him to help her to do 9 things of revenge against her cheating boyfriend. The next day it seems Margo has disappeared she left clues for him Quinten and his friends set off to find her before senior prom.

More than anything in the world, seven-year-old Olive Hoover wants to be a beauty queen. When she qualifies for the prestigious Little Miss Sunshine beauty contest, the entire family embarks on a long road trip from Albuquerque to California in their 1978 Volkswagen Station Wagon Type 2; however, the journey is anything but smooth. But, on the road to success, anything that can go wrong will go wrong. What has the future in store for Olive? Does she stand a chance of fulfilling her dream?

Kazakh TV talking head Borat is dispatched to the United States to report on the greatest country in the world. With a documentary crew in tow, Borat becomes more interested in locating and marrying Pamela Anderson.

Tim Lippe has no idea what he's in for when he's sent to Cedar Rapids, Iowa to represent his company at an annual insurance convention, where he soon finds himself under the "guidance" of three convention veterans.

Zoey Clarke is a whip-smart computer coder forging her way in San Francisco. After an unusual event, Zoey, who always preferred podcasts over pop songs, suddenly starts to hear the innermost wants, thoughts and desires of the people around her through popular songs. At first, she questions her own sanity, but after getting some guidance from her musically adept neighbor, Mo, and making a breakthrough with her ailing father, Zoey soon realizes this unwanted curse may just be an incredibly wonderful gift as she connects with the world like never before.