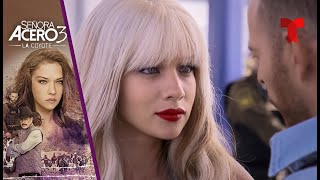 Señora Acero, also known as Señora Acero: La Coyote, is an American telenovela created by Roberto Stopello and it started airing on American broadcast channel Telemundo on 23 September 2014, and concluded on 29 January 2019. Produced by Argos Comunicación and Telemundo Studios, and distributed by Telemundo Internacional.

Set and filmed in Mexico, Seasons 1 and 2 tell the story of Sara Aguilar (Blanca Soto), a young female housewife, who by self-indecision ends up becoming the most powerful drug trafficker in all of Mexico to be able to protect her son and her friends. Seasons 3 and 4 focus on the life of Vicenta Rigores better known as "La Coyote" (Carolina Miranda), a beautiful young woman who helps immigrants cross the borders of Mexico to go to the United States, after learning that she is the daughter of Vicente Acero and has the blood of Acero, ends up joining the world of drug traffickers along with her brother Salvador Acero (Michel Duval) so she can continue to help immigrants and defend against injustices. (Wikipedia)