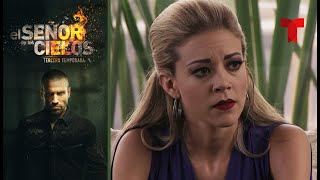 In season three, after several months imprisoned in naval bunker in Mexico, Aurelio receives the mutilated head of his brother Chacorta in a box, implying that his brother has died, who gives him reason to wage a war against all his enemies and to look for the murderer of his brother, to avenge his death. After all the problems with the government and the DEA, Aurelio learns that he suffers from kidney failure and decides to remember his past in order to find his lost son. (Wikipedia)