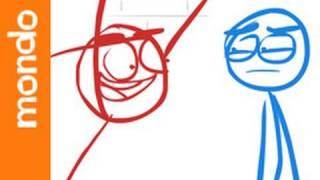 Dick Figures is an American adult animated web comedy series created and written by Ed Skudder and Zack Keller. The series, featuring two stick figures named Red and Blue who are best friends, aired for the first time on November 18, 2010. Episodes, which are typically under 4-minutes in length, are distributed on YouTube by Mondo Media. The series is aimed at mature audiences. In 2012, Zack Keller was nominated for an Annie Award in the Directing in an Animated Television/Broadcast Production category for the episode titled Kung Fu Winners. Most episodes are rated TV-MA with a select few having been given a TV-14 rating. The series, comprising 40 episodes, has been viewed over 250 million times. After raising $313,000 on KickStarter, a feature-length Dick Figures film has been produced at Six Point Harness and distributed by Mondo. The 73-minute film became available on all major digital platforms on September 17, 2013, including the new independent movie streaming site, Yekra.