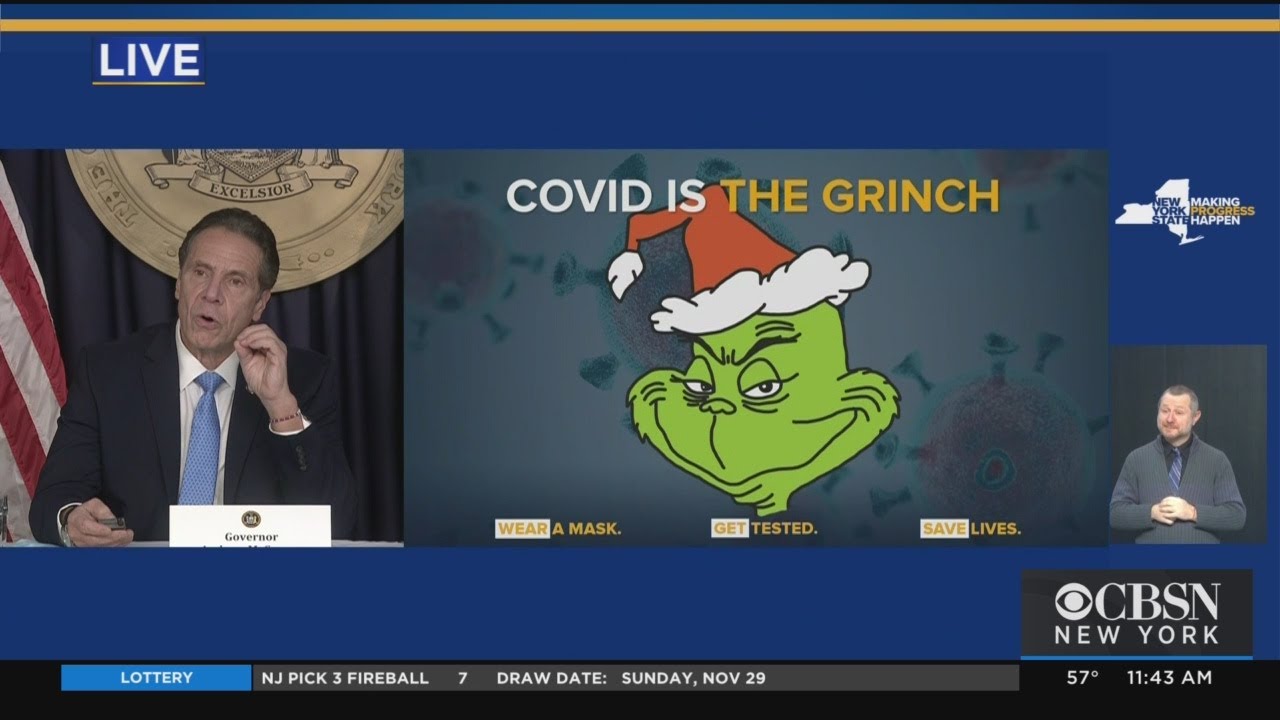 One 62-year-old Stuart Bee, whose family had reported him missing last Friday after he failed to return from a boating trip, was suddenly found alive the following Sunday, clinging desperately to the hull of his capsized vessel far off the coast of Florida, officials said in a statement. "It's amazing. It's 86 miles offshore," U.S. Coast Guard Petty Officer Veronica Dunn-Depretis told ABC News of Bee's survival, adding that he's lucky to be alive.

Covid-19, The "Grinch" This Christmas

“In warfare there are no constant conditions,” New York Governor Andrew Cuomo said this week. “Covid is shifting the battlefield dramatically and we have entered a new phase.” Heath officials are talking about “a surge on [top of] the surge,” Cuomo noted, with the now colder weather that often comes with the holidays. “Covid is the Grinch,” Cuomo said, and that keeping hospitals running smoothly is the key to avoiding an emergency stop provision.

This past Tuesday, Pennsylvania's Highest Court questioned whether Bill Cosby's alleged history of intoxicating and sexually assaulting young women amounted to a signature crime pattern, given studies that show as many as half of all sexual assaults involve drugs or alcohol, CBS News reported. Bill Cosby, now 83, is trying to overturn his 2018 sex assault conviction because the judge had let prosecutors call five other accusers who said Cosby mistreated them the same way he did his victim, Andrea Constand; the defense said that the sudden arrival of the five other accusers prejudiced the jury against the actor and should not have been allowed.

At least for the state of California, the first batch of coronavirus vaccines are expected to arrive for distribution sometime in mid-December. Since the announcement, the Advisory Committee on Immunization Practices (ACIP) have voted on a distribution plan that would prioritize vaccinating healthcare workers and nursing home residents. Mike Wasserman, a member of California's vaccine advisory board, for one, is pleased with the decision thus far. "Healthcare workers are and should be at the top of the list," Wasserman said. "Including healthcare workers who work in nursing homes, where the most deaths have occurred from this virus."

A Silent Night For The Rockefeller Christmas Lights

While the Christmas tree illumination event in Rockefeller Plaza had the usual theatre, for this year, it was devoid of the thousands of people who traditionally pack the area to watch the display. And while Police have indeed closed off the area around Rockefeller Plaza as authorities fear festive celebrations will become super-spreader events, that didn't stop the people trying to gather to watch the famous light display begin outside the nearby Saks Fifth Avenue, Sky News reported. "I think the more people that gather, the more they travel, it'll get worse - but I wanted to come see the tree anyway," said Kelsey Stirling, a Midtown resident.

Facemasks, The "Instruments Of Freedom"

Pres. Trump has since floated the idea of running for president again in 2024 at a holiday reception at the White House this past Tuesday evening. “It’s been an amazing four years,” Trump told the crowd, which included many Republican National Committee members. “We’re trying to do another four years. Otherwise, I’ll see you in four years.” And while everyone at the reception appeared have been ecstatic about the news, potential political rival Bernie Sanders does not seem to be as pleased.

"This may be the most important speech I've ever made. I want to provide an update on our ongoing efforts to expose the tremendous voter fraud and irregularities which took place during the ridiculously long November 3rd elections. We used to have what was called Election Day," Pres. Trump said during the opening of his speech which went onto criticize the mail-in voting process which he says led to widespread fraud in crucial states.

President-elect Joe Biden suggested this week that he supports returning individual and corporate tax rates to George W. Bush-era highs, Fox News reported. Biden is claiming that as long as "everybody pays their fair share for God's sake," the plan will help generate economic growth without long-term fiscal harm in the future. “And by that fair share, I mean there’s no reason why the top tax rate shouldn’t be 39.6 percent, which it was in the beginning of the Bush administration," Biden said. "There’s no reason why 91 Fortune 500 companies should be paying zero in taxes.”

Trump Demands Biden To Prove He Won The Election

"Biden can only enter the White House as President if he can prove that his ridiculous '80,000,000 votes' were not fraudulently or illegally obtained," Pres. Trump wrote on Twitter, which has since labelled the tweet as "disputed". "When you see what happened in Detroit, Atlanta, Philadelphia & Milwaukee, massive voter fraud, he's got a big unsolvable problem!"

Get all the latest news, live updates & top stories on Pennsylvania primary