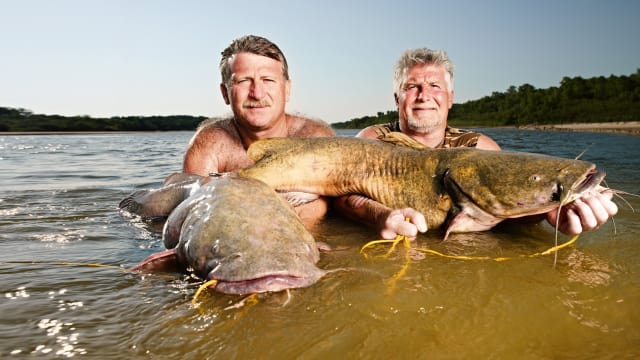 Hillbilly Handfishin' was an American reality television show about noodling, the sport of fishing for catfish using only bare hands and feet. The series aired on Animal Planet from August 7, 2011 to August 5, 2012. The show starred Oklahoma fishermen Skipper Bivins and Trent Jackson, self-proclaimed "hillbillies" who take tourists from cities on noodling expeditions in muddy lakes, rivers and streams. The Bivins family runs Big Fish Adventures, a noodling-exhibition company based in Temple, Oklahoma.Hillbilly Handfishin' was developed by Sara Helman and produced by Half Yard Productions; the executive producers were Abby Greensfelder and Sean Gallagher.Although officially set to premiere in August 2011, a pilot for the series first premiered on Animal Planet on September 24, 2010. At the time, it averaged 630,000 viewers, which was 44 percent better than the timeslot average at the time. Subsequent encores of the pilot on December 9 and December 22 drew viewerships of 653,000 and 722,000, respectively.Before the series premiered, Field & Stream magazine writer Chad Love criticized the premise and concept of the show, expressing particular concern that it would portray Oklahoma and its residents in a stereotypical and negative light. Love wrote, "Here's one from the 'Do We Really Need A Reality Show For This?' files."Episode 2 featured three pairs of participants, including Tony and Nick from Chicago, Ken and his daughter Natalie, and retirees Valerie and John. Episode 3 featured Hiliary and Kerry, a newlywed couple, Georgia friend Terisa and Tenia, and brothers-in-law Brad and Jim. (Wikipedia)

Trending Searches: Latest News, Coronavirus, Live, Top Weirdest News, True Crime, Supernatural, Unsolved, Tasty, Swimsuit, Rick, Family Guy, A Baby Story, A Crime To Remember, WWE
It should be noted that FREECABLE TV is a simple search engine of videos available from a wide variety websites. FREECABLE TV does not host any content on its servers or network. If you believe that your copyrighted work has been copied in a way that constitutes copyright infringement and is accessible on this site, please contact us at freetvapp.question@gmail.com.