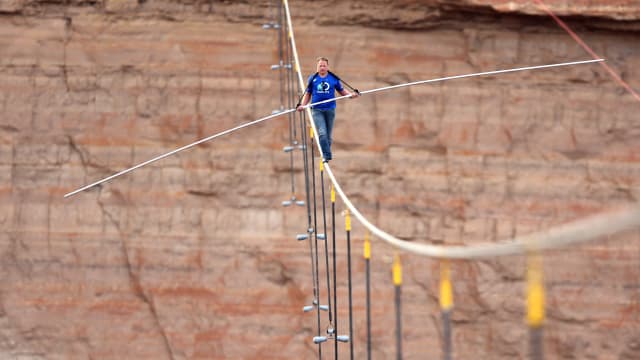 Skywire Live with Nik Wallenda is a Discovery Channel special that aired on June 23, 2013. The special was billed as a highwire walk across "the majestic Grand Canyon". Interpretations varied as to whether the actual location – the Little Colorado River Gorge in Navajo territory outside Grand Canyon National Park's borders – was truly part of the Grand Canyon. Highwire artist Nik Wallenda had been planning to walk across the canyon since 2008, but put the plan on hold first due to logistical difficulties and then to highwire walk over Niagara Falls in 2012. After his success at Niagara, he accelerated plans to cross the canyon. In March 2013, Wallenda and Discovery came to terms on television rights for the walk. To prepare, Wallenda practiced in his home town of Sarasota, Florida in heavy winds, including during Tropical Storm Andrea. On June 23, he successfully completed the walk without safety devices in approximately 23 minutes, making him the first person to tightrope walk across a Grand Canyon area gorge. At 1,500 feet (460 m), it was the highest walk of his career. Afterwards, Wallenda said it was more difficult than he had expected. Skywire Live aired live in over 200 countries worldwide. It was a ratings success in the United States, generating Discovery's highest-ever rating for a live broadcast. The show also generated a lot of interest of social media, with Wallenda's public display of his Christian faith being a focal point. (Wikipedia)

S1E102: Countdown to the Canyon