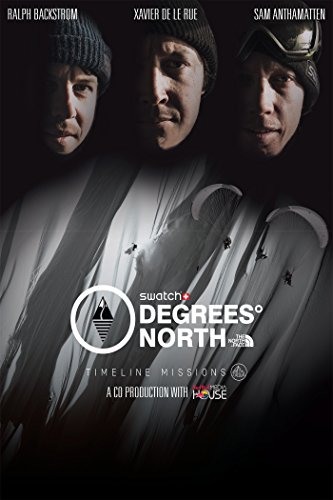 Degrees North mixes hair-raising action footage of leading freeriders with a story of adventure and discovery. World-renowned freeriders Xavier De Le Rue, Samuel Anthamatten and Ralph Backstrom progress the sport of freeriding through the use new technology to scope remote areas in order to show ski and snowboard action in a way never seen before. The film charts the progress of an idea to use these wings to access areas from the air in a more personal and organic way, with the aim of capturing great action footage. However the realities were not so simple. We see the adventurous spirit of the riders pushing the idea further throughout the film. They begin with the idea of using the wings to scope lines then develop the skills to allow them to be dropped on the top of breathtaking mountains. Finally they take it to the next level by cutting out the climbing altogether and use the wings to drop directly onto the face to ride. Degrees North is an intimate expose of what adventure means to leading action sports athletes. We see a dangerous and untried technique coupled with the worst snow season for generations. Degrees North is an adventure story filled with high and lows. Literally!