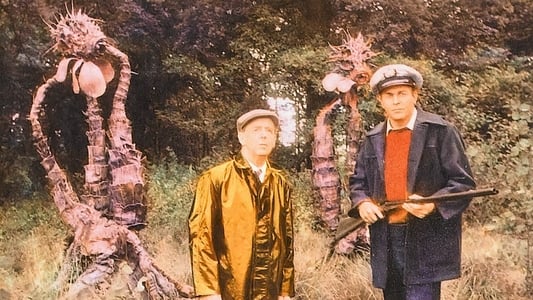 A shower of meteorites produces a rare night time spectacle that blinds anyone that looks at it. As it was such a beautiful sight, most people were watching, and as a consequence, 99% of the World's population go completely blind. In the original novel, this chaos results in the escape of Triffids: farmed plants harvested for their oils, which are capable of moving themselves around and are carnivorous. In this film version, however, the Triffids are not indigenous plants. Instead they are space aliens whose spores have arrived in this and an earlier meteor shower. Derided by the original novel's author, John Wyndham, for straying so far away from the source material.

Watch Day of the Triffids Online

Day of the Triffids Casts

Susan - Child on the Train

Day of the Triffids Related

Candyman: Day of the Dead

Queen of the Damned

The Undertaker and His Pals

Stargate: The Ark of Truth

Platoon of the Dead

Day of the Animals

Curse of the Swamp Creature

Curse of the Scarecrow

The Clown at Midnight

John Dies at the End

The Last House on the Left

The Brain That Wouldnt Die

Don't Look in the Cellar

Journey to the Center of Time

Invasion of the Bee Girls

Attack of the Eye Creatures

The Legend of Secret Pass

Empire of the Ants

The Adventures of Hercules

THE DAY OF THE DEAD

The Food of the Gods

I Saw the Devil

A Bucket of Blood

Children of a Darker Dawn

The Beast of the Yellow Night

Unearthed and Untold - The Path to Pet Sematary

Memory: The Origins of Alien

House of the Living Dead

Horror of the Blood Monsters

Manos The Hands of Fate

Let the Right One In

I Spit On Your Grave 2

Jimmy Did you Get One?

The Hours 'Til Daylight

Invasion of the Triffids

Dark Watchers: The Women in Black

A Crack in the Floor

A Night in the Woods

Have Rocket -- Will Travel

Spaceship to the Unknown

The Day of the Dead

They're Playing with Fire